EBSD analysis is a powerful microstructural crystallographic characterisation technique for crystalline or polycrystalline materials. Standard EBSD analysis on bulk samples and surfaces is performed on high-tilt samples (typically 70° from horizontal). The EBSD pattern reveals the crystal orientation and in polycrystalline materials the variation of orientation amongst the crystals. For optimum EBSD results, deformation free, polished surfaces are needed.

Transmission EBSD (t-EBSD) analysis is only possible on (very) thin TEM specimens on a TEM grid or on a TEM lamella attached to a FIB grid. EBSD analysis on thin samples can be performed in backscatter mode at 70° tilt (from horizontal) or transmision mode at 20° (from horizontal). For transmission EBSD or t-EBSD it is imperative that transmitted electrons can reach the EBSD detector without any obstruction.

EM-Tec  t-EBSD holders are specifically designed to generate transmission Kikuchi patterns. The t-EBSD holders include an opening of Ø2mm in the base. The top is formed by a fork-shaped phosphor bronze clip which clamps the TEM or FIB grid so that t-EBSD imaging and analysis is possible over the Ø2mm  area.
EM-Tec t-EBSD holders are available with one to three TEM grid capacity. The choice of configurations include: 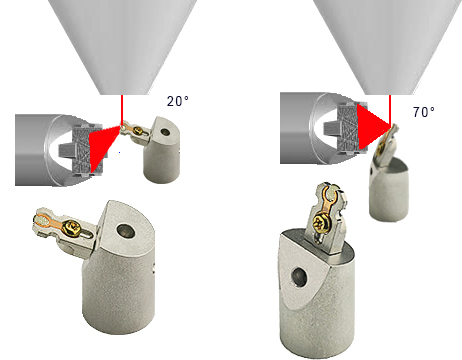 Capacity, size and compatibility of the EM-Tec t-EBSD sample holder and kits