EM-Tec variable tilt and pre-tilt holders are useful for imaging specimens under a pre-tilt angle without having to tilt the SEM stage. With these holders you can image previously mounted specimens on standard pin stubs or Hitachi stubs at pre-set angles or any chosen angle. The tilt holders are particularly useful for table top SEMs without specimen tilting facilities or for standard SEMs where high tilt would interfere with the polepiece or with detectors in the chamber. Sometimes, the pre-tilt holders are used to get full tilting from the SEM stage; with a pre-tilt 45°  holder, the SEM stage only needs to be tilted another 45° to get a full 90°  specimen tilt. 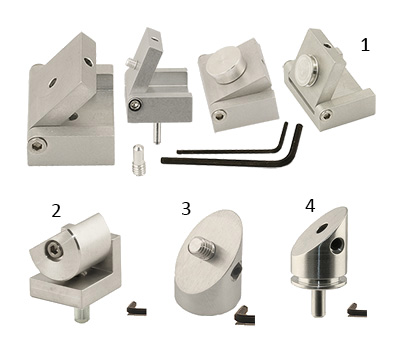 All the holders are precision machined from vacuum grade aluminium and include set screws and allen key.
For using the pre-tilt and variable tilt holders on JEOL SEMs, you can find the JEOL pin stub and JEOL M4 on the EM-Tec SEM stub adapters page .

Capacity, size and compatibility of the EM-Tec pre-tilt and variable tilt holders:

Back to top of page