Tergeo integrates multiple process control technologies to control critical parameters required for optimal plasma etching, plasma ashing and plasma cleaning processes. These include pressure and plasma sensing (see below) and automatic mass flow control of gas input. Operation is fully automatic, with an intuitive user interface featuring a 7″ touchscreen which make the operation as easy as a tablet device, with the embedded microcontroller supporting 20 customisable user recipes. PIE (Plasma Ion Electron) Scientific’s understanding of the importance of consistency and repeatability in scientific research and small scale production is embodied in the design of the Tergeo series to deliver every day reliability and repeatable performance.

Tergeo is a  benchtop instrument with a quartz glass process chamber with that is 110mm ID and 280mm long to accommodate one 4” wafer.  Tergeo-Plus uses a 75W 13.56MHz high frequency RF supply with auto-matching, which is adjustable from 1 to 75 W at 1W intervals. An upgrade option is available for 150W RF power. 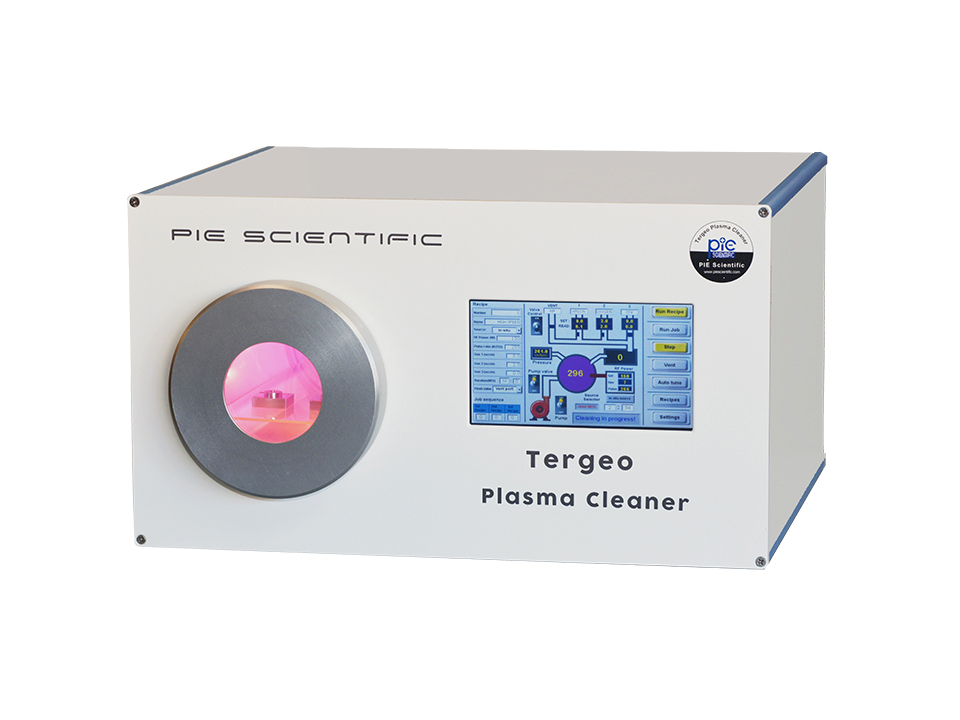 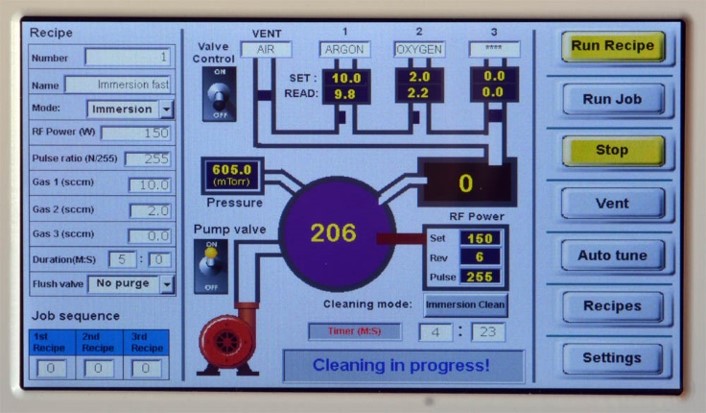 A key advantage of the Tergeo series is the integrated, patent-pending plasma sensor technology. The RF plasma strength is measured quantitatively and displayed in real time on the LCD touch screen controller. The operator can use the plasma strength data as feedback to adjust gas flow rates and RF power to give desired plasma cleaning speeds – ensuring repeatable and consistent results for users with beginner or expert levels of experience

Using pulsed operation at 480Hz the Tergeo can reduce “dust” particle formation, trenching, notching and charging. For fluorocarbon PECVD processes the use of pulsed operation can yield rougher surface structure and thereby give greater hydrophobicity 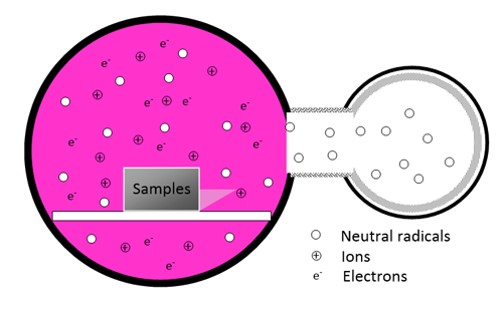 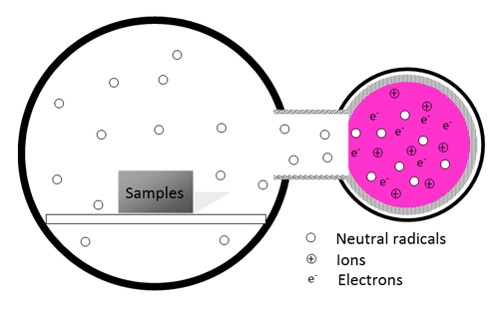 Immersion mode – for high-speed etching/ashing
Tergeo has the capability of two integrated RF plasma sources in one instrument – an immersion source plus the option of a remote downstream source (PIE-TG102). When the plasma is generated inside the main specimen chamber, the immersion mode subjects specimens to both energetic ion bombardment and chemical reactions with neutral radical species. Immersion mode processing is required for high-speed plasma etching, plasma ashing and surface modification. 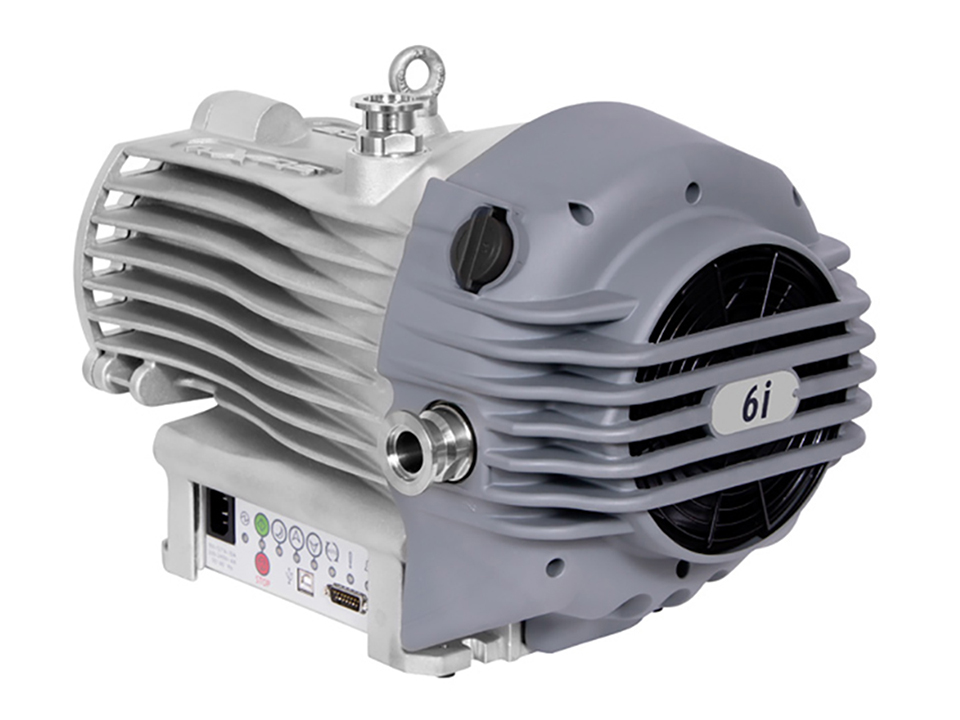 Tergeo requires a primary vacuum pump. The Edwards nXDS6i scroll pump is recommended when oil-based pumps need to be avoided (i.e. dry pumping). We also offer standard oil-based rotary pumps including a Fomblinised version for applications where high throughputs of oxygen are required.

Please see Ordering Information for details of pumps and accessories

For other instruments in the Tergeo range of plasma cleaners please see here: Tergeo.

Definition of an RF plasma

A radio frequency (RF) plasma is an ionised gas phase substance that consists of ions, electrons, and neutral atoms and/or molecules that grossly maintain charge neutrality. Electrons and ions should be close enough so that each of them can influence many nearby charged particles within a radius called the Debye screening length. As a result, charged particles in the RF plasma respond collectively to external electromagnetic fields. With a high density of free-moving ions and electrons, plasma is highly electrically conductive. With the exception of boundary regions between the plasma and electrodes, a plasma contains the same amount of positive and negative charges. There is no space charge within the bulk of the plasma. 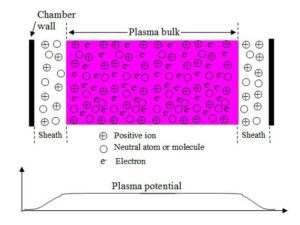 Electron temperature is usually equal to or higher than that of ions. Since electrons are much lighter than ions, they can escape from a plasma at a much faster speed than ions, providing there is no confining potential barrier. Once electrons are nearly depleted from the boundary interface between the plasma and electrodes or specimen, a region with only positive ions and neutrals will be formed. This usually dark boundary region is called plasma sheath. Positive charges in the plasma sheath can push more ions to diffuse out of the plasma. It also creates a potential barrier to prevent electrons from diffusing out of the plasma. Eventually, the loss rate of electrons and ions will reach an equilibrium state. The plasma sheath also creates a positive plasma potential with respect to the grounded chamber walls. The voltage drop across the plasma sheath can accelerate ions and create an ion sputtering effect in many applications.

How an RF plasma is generated

Electrons and ions in plasmas can disappear through diffusion or recombination. To sustain a stable RF plasma, external excitation is required to create more electrons and ions so that their creation rate can reach a balance with the loss rate. Most RF plasma generation methods rely on heating free electrons to high enough energy to break down neutral atoms or molecules into ions and electrons.

PIE Scientific specialise  in developing advanced plasma systems for plasma etching, cleaning, surface treatment, ion and electron beam production applications. The company was founded by alumni of the Plasma and Ion Source Technology group in the Lawrence Berkeley National Laboratory. After 15 years of experience in developing advanced semiconductor capital equipment in Silicon Valley, they realized that many existing low-cost plasma cleaners and plasma treatment systems were still using decades-old technology. Therefore, they decided to bring state-of-the-art plasma technology developed for the semiconductor industry and nuclear research into affordable plasma instruments. Their SmartClean™ technology has been well-received by customers.

An Edwards scroll pump and silencer/filter and flexible metal vacuum hose is recommended.

Options and accesories for Tergeo